Looking for a sexy, fun adult game with a bit of a challenge?

Cloud Meadow, a monster breeding RPG and farming game doesn’t sound like it could offer much adult fun but this new game is sexier than you’d think.

Combining elements of a visual-novel and battle simulator, this adventure is plenty NSFW…and then some.

What is Cloud Meadow?

Cloud Meadow was launched to the video game distribution service, Steam, in March 2020 but funded through the content subscription and crowdfunding platform Patreon since early 2019.

One of Patreon’s highest grossing earners at the time, the project was ultimately pulled but Sandler evidently salvaged enough to create something from the remains.

Set in a magical world of floating islands in the sky, Cloud Meadow is a fantasy adventure game where man and monster work side by side to prosper.

The game features in depth dialogue with over one hundred characters, 200+ recipes for crafting items and you can engage in various romances with human and monster kind.

The developers put the emphasis of gameplay on the three Fs:

Together these signify your goals for the game:

There’s more beyond these overarching missions to enjoy and you can simply explore the world of Cloud Meadow in free-roaming to recruit allies, collect ingredients for your recipes, cook meals and upgrade your farm.

The main aim of the game though is to keep building your farm and creating a prosperous town for your fellow citizens in which both humans and monsters can live together peaceably.

All in all, there is a lot of complexity to this game and plenty to keep you entertained for hours on end.

You can play this PC sex game as one of the two protagonists, Evan or Eve. Both First Class Union Frontiersmen whose first assignment straight out of training academy is to head to a little town called Cloverton.

Here you will be met by Jubelle the town’s Operations Director who instructs you to get their farm back to working order. Neglected and unloved for some years, this in itself is a mammoth task but you will have lots of help (and hindrance) along the way.

As an excellent frontiersman you have the skills to farm and craft in order to level up and restore this small holding back to its former glory.

In order to do this, of course, you will need to venture beyond  the safety of the town’s limits to explore the wilds and retrieve components and essences to complete your recipes.

As you do so, you will come across plenty of creatures in the forestland which you can collect and breed. You may also bump into foes and have to battle your way to victory….or you may run into other characters who are looking for some less combative action.

Yes, this is an adult game after all so do expect sexual shenanigans between townsfolk. And not all of them are human either. 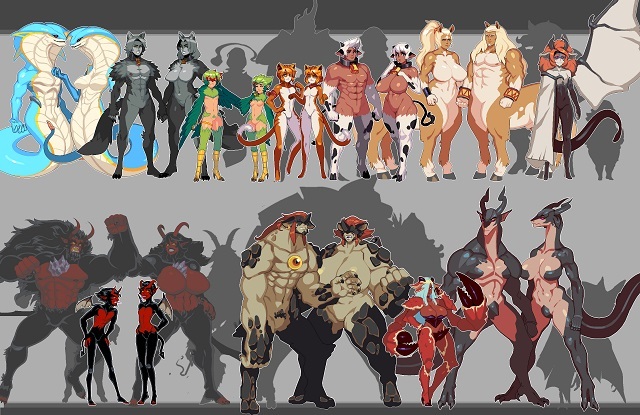 Cloverton is inhabited by species such as witches, dwarves, dragons, yetis, mandrakes, ogres and all manner of animals including sharks, frogs, dogs and scorpions.

As for the landscape (or skyscape) of the game, there are several locations to explore. First up there is your town of Cloverton in which in which you can find your homestead (or farm).

Here is where you will spend most of your time, your aim being to upgrade your plots to add special buildings, new fields and pastures as well as a dock.

Additionally, the game features various dungeons some of which are only accessible on certain days but each of which is inhabited by different enemies. Dangerous places to explore, the point of going there is to harvest special items to advance in the game.

Within your homestead you can match a pair of monsters to mate (or you can mate them yourself) to create a new type of creature.

There is a complex system of how you can do this which can be found in the ‘Family Tree’ which means that offspring cannot breed with certain family members or previous generations.

Collecting new monsters is vital as you cannot breed with creatures that are already pregnant, tired or otherwise busy. Obviously, to create new species, you need diversity so exploring new parts of the game is a must in order to advance and build your farm. What Does Playing Cloud Meadow Cost?

There is a demo version of Cloud Meadow which is free to play but in order to experience and explore the game to its full potential you will need to either buy the game through the Steam platform or support Team Nimbus on Patreon.

The price on Steam is $19.99 or you can select a membership level on Patreon as below:

Note: You can find some of the other bestselling NSFW games on Steam here.

And, if you are that taken with the game’s characters themselves you can even buy figurines via Team Nimbus’s merchandising outlet.

Please note that the demo only allows the first seven days of gameplay as a sample. Cloud Meadow is no exception to this statement and is yet another fine example of a NSFW game that has made it to market with the help of crowdfunding support.

Though an ongoing development, the game even in its current form should appeal to any fans of classic turn based RPGs and/or lovers of sophisticated farming sims.

The gameplay across these two genres is well developed and includes some complex storylines and challenging games. The breeding structure for instance is well thought through and compares favorably to some big market players.

With M/M, F/M and even futanari sequences to enjoy this elevation from SFW to NSFW is what is drawing the crowds.

Graphically, the game isn’t rendered in 3D or even HD but in a retro style which is reminiscent of that classic RPG sim Stardew Valley.

Obviously there is an appeal here for fans of fantasy themes and being able to breed with monsters and non-human creatures puts Cloud Meadow ahead of the competition when it comes to interspecies relationships.

Our overall opinion of this game, even in the current stage of development, is that it has the potential to be a real market leader in this genre.

Few games of this kind are as complex or as challenging and often only offer a few days’ worth of entertainment. The nice thing about this title is that, being a Patreon supporter, you get to have those dialogues with the developer that you wish you could have with other gaming studios.

This means the way the game is shaped is entirely up to the community that helps pay for it.

Fancy being a part of that conversation?

All featured images via Team Nimbus.